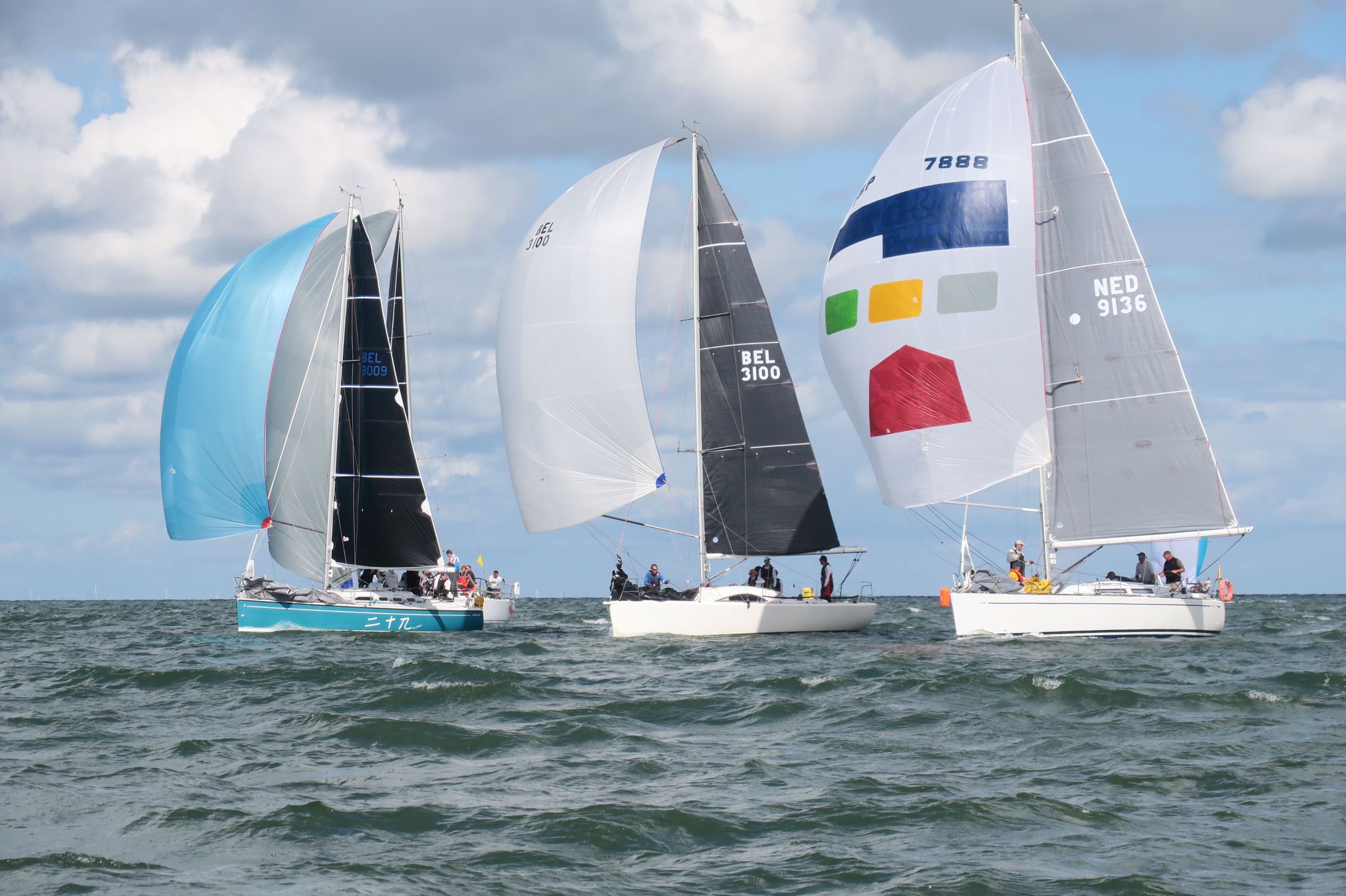 The IRC European Championship has a bit of a tradition of smaller boats winning. In Cork in 2016, the first ever IRC European Champion was Paul Gibbons and his diminutive Quarter Tonner Anchor Challenge while the following year in Marseille it was Guy Claeys’ JPK 10.10 Expresso 2, winner of IRC Four.

Could this year’s seventh IRC European Championship title go to Alain Rousseau and his mostly French crew on Picsou, the smallest boat among the 39 boats competing here at Damen Breskens Sailing Weekend? The Belgian-flagged Dehler 29 had a resounding day today, the only boat to post three bullets. This has caused them to go into the final day leading by the biggest margin across the three classes. Yet as an indication of the closeness of the racing at this major IRC championship the Belgium boat is just five points clear of yesterday's stand-out team, Michel Dorsman's X-362 Sport Extra Djinn, in turn just one ahead of Iwan Vermeirsch's HOD35 Zarafa (another former Solent boat that has migrated to the Netherlands) with Kees Keetel's A-31 CSI Rakker also in the running.

Like yesterday, PRO Menno Vercouteren today laid on three races – two windward-leewards and a round the cans course. As a result one discard has come into effect. The wind was again from the north, but started at around 9-10 knots and finished having veered into the northeast, heading for the high teens.

In IRC Two today another boat came close to a perfect scoreline. Here in the middle group it is safe to say J/109s are dominating. But surprisingly today’s star player was neither Arjen van Leeuwen's Joule, which remains on top of the leaderboard in the class, nor John Smart's slightly lower rated Jukebox, now third overall, but the Royal Navy Sailing Team on their sistership Jolly Jack Tar. The British crew, led by Mark Flanagan, Rear Commodore (Offshore) of the Royal Naval Sailing Association (RNSA), today scored a 1-1-3, launching them into second, just three points off the lead, and making the IRC Two podium an all-J/109 affair (including two British teams) going into the final day.

“It went well today. We are slowly coming together as a team, which is good,” commented Flanagan. “We are learning each other’s strengths and weaknesses and we are getting better as the event goes on instead of worse!” Jolly Jack Tar changes crew from event to event and as Flanagan puts it they have a pool of about 500 people from which to choose , obviously dependent upon their availability. “Here we have probably one of our best teams, which is really good.” As a services boat, Jolly Jack Tar has a busy life – this year alone in addition to competing in the RORC offshore series, she has been across to Cork Week and up to West Highland Week.

They chose to come to the IRC European Championship in Breskens for the experience. “This sounded really good. It’s a European Championship - it takes us to a higher level so we can develop our sailors. Plus we hadn’t been to Holland before!” Of their success today Flanagan added: “The starts are really important at this event. If you can do that you can get a clear track upwind and you are going to win. We have managed to get clear air.”

In IRC One, there has been upset with the scratch boat, Van Uden-ROST last night having her disqualification overturned by the International Jury. This had stemmed from a start line incident in Thursday’s non-discardable, double points scoring medium coastal race. This has launched them back to second overall, just one point behind the immaculate Moana, the Beneteau First 47.7 campaigned by the Goubou family that leads IRC One overall.

Van Uden, which is sailed by a youth crew from the Rotterdam Offshore Sailing Team today posted a 2-10-1. “Today we came off the water and thought we sailed every race really well,” said skipper, round the world sailor Gerd-Jan Poortman. They are able to discard today's second race that was caused on the second lap when they experienced a 30° wind shift.

According to Poortman, starting proved a challenge today with the unusual situation of 1.5-2 knots of current lifting the fleet up to the race committee boat. “We decided to play it safe. We are lucky we are the fastest boat and could start to leeward and not get into the mingle too much. There is a lot of tide and a whole bunch of sand banks and the wind bending around the land. But it was good day – sunscreen, shorts, T-shirts, etc.”

Tomorrow, after two more races and a second discard is applied, the winners will be decided from each class and the top boat of the three will be crowned IRC European Champion.

Further information is available on the event website: https://www.breskenssailing.nl/