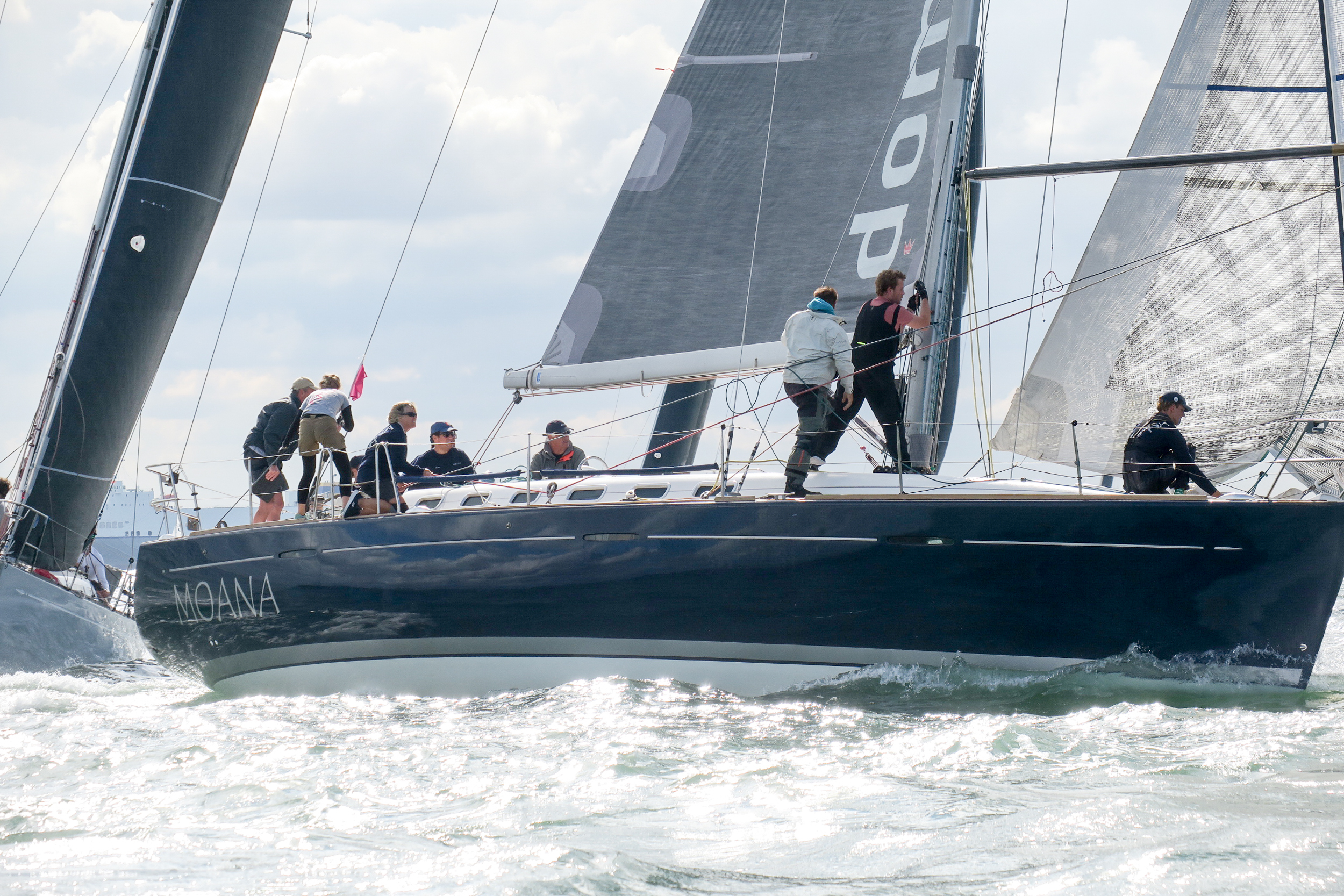 On the last of four days of magnificent racing off the Dutch port of Breskens, two final races were held and the winner of the 2022 IRC European Championship decided by the closest of margins.

Coming off the water it looked very much like this 7th European Championship for the RORC and UNCL’s popular rating rule would go to the fleet’s smallest boat. Alain Rousseau and his largely French crew on the Dehler 29 Picsou enjoyed a resounding regatta, first winning the double points-scoring, non-discardable medium coastal race on Thursday and then, over the last three days following this by scoring five bullets in eight races. This included wins in both of today’s windward-leewards held in a 10-16 knot north-easterly. However, the results of Francois Goubau and his team on board the Bénéteau First 47.7 Moana were almost as good, but significantly they were achieved in a larger class of 18 boats (IRC 0 and 1 combined) compared to IRC 3’s nine. Using IRC’s formula that takes into account each boat’s result, plus numbers of scoring races sailed and class size, it was instead Moana that was crowned the 2022 IRC European Champion, just 0.003 of a point ahead of Picsou after calculations were completed.

“It is surprising for sure, but I am very pleased,” said an elated François Goubau, who had assumed, like many, that Picsou’s excellent scoreline had won her the prestigious title. “I think this is the biggest championship I have won in sailing in 30 years.”

Moana is a 2000 vintage cruiser-racer from Farr Yacht Design that Goubau has been racing since 2005 with a large contingent of immediate family, including his wife Michèle Gelhausen and sons Laurent, Mathieu and Alexis. While Moana may be a relatively old family cruiser, racing her has been, and remains, no casual thing. Goubau is a past Commodore of the Royal Belgium Sailing Club in Zeebrugge and since 2005 the dark blue hull of Moana has been seen out on the Solent for more days than many local race boats.

For this, her first ever IRC European Championship, Moana arrived fresh from a class win at Cowes Week. But most impressive is their Rolex Fastnet Race track record: In 2021, they took part in their 11th consecutive edition, having podiumed in three. Despite only being 38 years old, for their helmsman son Mathieu it was his 12th participation in the biennial race.

Of the IRC European Championship, Francois Goubau commented: “It has been perfect. It was ‘sailing weather’ with the sun and the wind - and the organisation was perfect.” As to why they won, this was clearly in part due to the crew’s super-familiarity with Moana, but also as Goubau explained, because “we prepared the boat very well last winter. We don’t have new sails but we took a lot of time to prepare the underwater shape. After COVID we had forgotten nothing!” For Picsou, the crew might have taken the news badly, particularly after ending up in the protest room upon coming ashore. However they were exonerated and then accepted defeat in a most gracious, sportsman-like way. “We know the guys from Moana well, they are good friends of ours,” said owner Alain Rousseau.

In fact Picsou’s helmsman Philippe Bourgeois was once the owner of the A-35 Dunkerque - Les Dunes de Flandre, part of the Flanders North Sea team with Moana and Elke (also competing here in IRC One) that finished second in the 2016 Brewin Dolphin Commodores’ Cup. “It is better that they won rather than anyone else. If we had had one boat more in our class we could have beaten Moana, but that is how it is.” C’est la vie. Ultimately in IRC One Moana finished three points ahead of the Ker 46 Van Uden, in turn 11 in front of the MAT12 Sailplane, campaigned by Jean-Eudes Renier, winner of today’s first race. In IRC Three Picsou finished 10 points ahead of Michel Dorsman's X-362 Sport Extra Djinn, tied on points with the third-placed HOD35 Zarafa of Iwan Vermeirsch. The biggest upheaval today, and where the points were closest after nine races, was in IRC Two. Here Arjen van Leeuwen's J/109 Joule managed to cling on to the lead to win by just 0.5 points from Paul Jonckherre's A-35 Njord which today scored a 1-2, mirroring Swiss owner Jörg Sigg and his J/99 Lällekönig's 2-1. Radboud Crul and his Dehler 36 Rosetta were third. “It has been extremely competitive. If you look how tight the results have been they have been jumping around with just seconds between the first few places every time. So you only win if you sail a really clean race. It has been great to have all the different types of boats on the start line.

“We sailed nine races and we’ve done a terrific amount of sailing. The weather has been glorious, the sea conditions have been fantastic and the socials have been fun. It was a great end-of-summer regatta and we have all been well looked after by Marnix Lippens and the Damen Breskens Sailing Week team.”

Further information is available on the event website: https://www.breskenssailing.nl/